I'm really extremely excited about Steampunk.  It's very Me, so I don't know why it took me so long to hear about this movement, but I've always loved Jules Verne and automata and all that stuff.
Basically it's like Cyberpunk, but from 1890: retrofuturism from the Victorian Age, as if our current technology had evolved from that period and kept its aesthetic.  It's wonderful.  There's also a branch that goes into fanciful technologies in the Old West, and actually the film Wild, Wild West--a very cool film, by the way--is extremely Steampunk.  I've recently begun watching the 1960s TV show the film was based on, and it's very cool and gadgety, as well.  It occurred to me, watching David Lynch's Dune recently, that that film would sort of fit, too, I believe, because it's futuristic technology with an almost ancient look to it.  Although that's more just exotic than it is specifically Industrial Age Earth.
It seems there's quite a few people building this insane stuff, but one of the major ones seems to be Hieronymous Isambard "Jake" von Slatt, who maintains Steampunk Workshop: 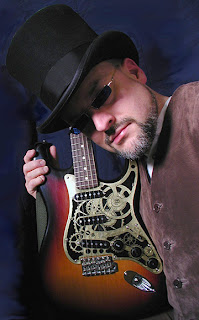 --Photo Wired magazine
He's made the most incredible modification of a desktop computer: 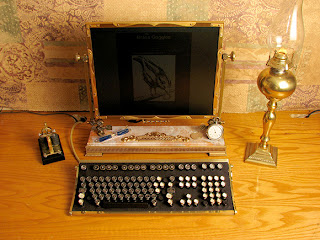 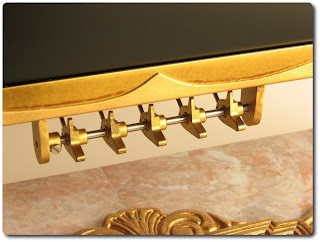 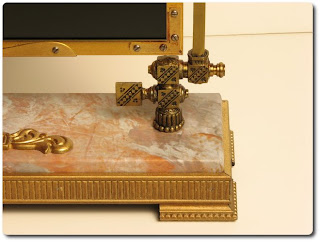 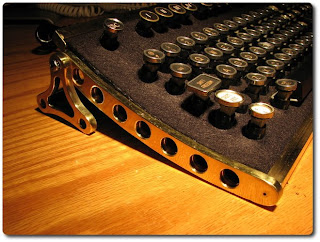 On his website he runs step-by-step through how he made basically every component pretty much from scratch.  At first I figured he'd gotten the keys from an old typewriter, but he even made those completely from scratch, which sort of makes sense, since old typewriters didn't have things like a "control" key.
Von Slatt is shown there with his Steampunk guitar, although I think I like this one, by J. Ritzmann of Thunder Eagle Custom Guitars a bit more: 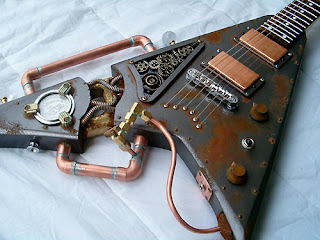 Another guy doing some serious stuff is Datamancer, and it appears he and von Slatt are friends or at least know each other.
Datamancer has made the most incredible modification of a laptop computer: 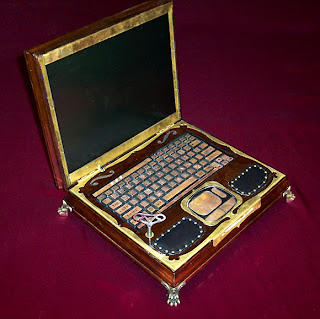 There are a lot more images of that, including some of the steps in doing the modification, on his website.  I'd seen them before but couldn't get them to load for me this time, maybe you'll have better luck than I did.  Anyway, I think it's really extraordinarily beautiful, and so cool.  The casing I believe is from an old music box, but much of the rest of it was created from scratch as well.
This is Datamancer's "Opti-Transcripticon": 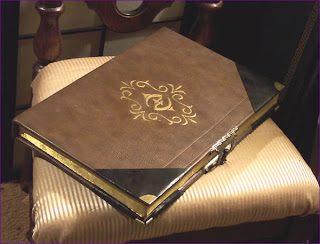 Which is actually a flatbed scanner: 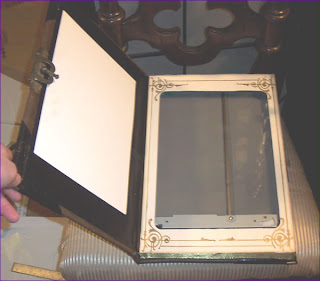 One of the other things they love playing with is pleonasm, which is like ridiculously long, unnecessarily complicated names for things.  Sort of like the way Monty Burns talks--which I've always loved--for lack of a better analogy.
So this is Datamancer's "Nagy Magical-Movable-Type Pixello-Dynamotronic Computational Engine," which he says is still being worked on: 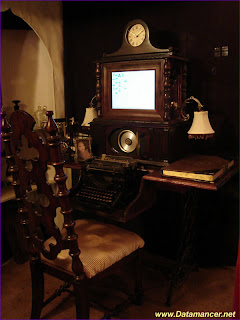 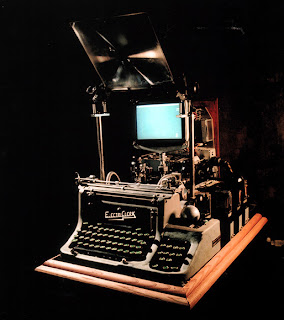 If you'd like hand-control of your new-fangled machine, a guy named Unklian has created a mouse with an "on-board furnace": 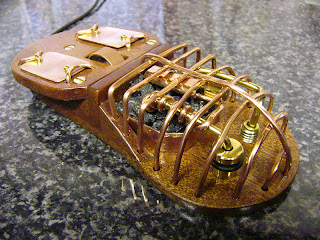 I think it's powered by some kind of crystal?

And here's one by (presumably) another guy named Jake, which is designed to control something called a "Telecalculograph": 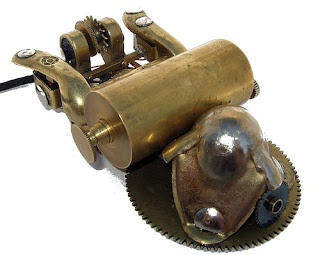 The third guy who would seem to be a major force with this stuff has a blog on here, as well, Alex CF.  He's evidently made props for movies and stuff like that.  He made spectacles that allow you to see the undead.  While Alex's work doesn't really use much real technology, which is what I find so amazing about von Slatt and Datamancer, the really cool thing is that he creates apparatus for fictional science of his own imagining, so it's really pretty awesome.
For instance, this is a Martian Botanical Preservation Device: 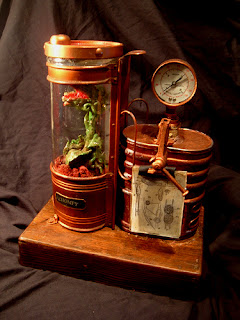 For keeping plants found on Mars alive for scientific study, no doubt.
This is a Chrono-Displacement Device: 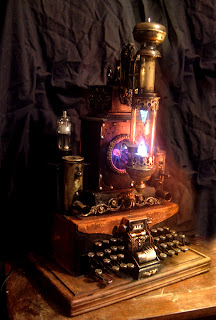 It creates wormholes allowing its user to travel through time.
I'm not exactly sure what "The Inquisitor" does, but I'm convinced it's something very awesome: 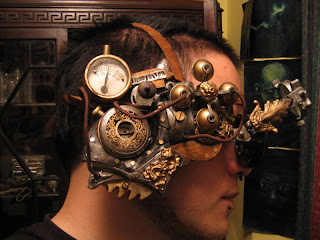 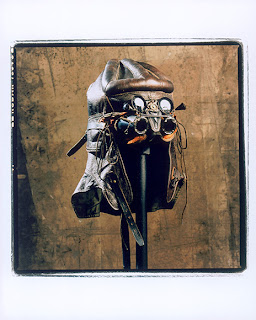 One of the things I definitely want to accessorize myself is one of these watches.  They're really incredible.  Rumor would have it that they're either not for sale or extremely difficult to purchase, but maybe sometime in the near future.  Here are a bunch found on Akihabara News: 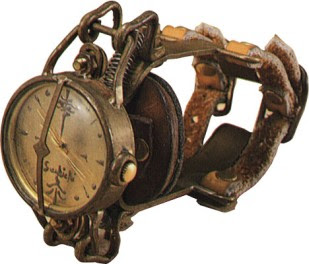 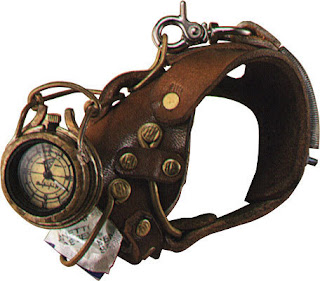 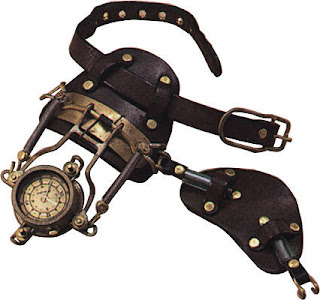 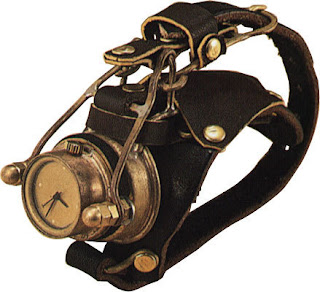 And a couple found at Eager-Beavers: 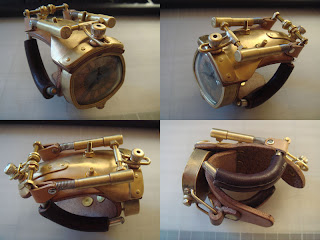 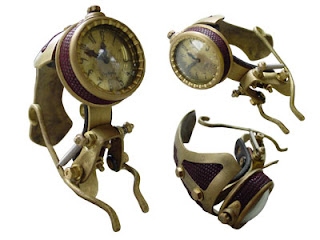 Last but not least, we musn't forget the kiddies.  This is the funniest thing at Dr. A's Spookypop, a website you absolutely must visit, because their stuff is out of control.  This, though, is "Pac Gentleman" by Erick Scarecrow: 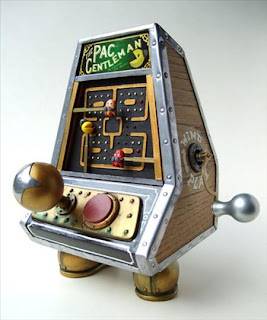 I don't think it really works, but who cares? It's evidently from the "Secret History of Video Games." Pac Gentleman wears a bowler hat and the ghosts have handlebar mustaches. Brilliant.

Ryan Witte
Ryan has a BA in Film Production from the School of Visual Arts, has been studying the Fine and Applied Arts for over three decades, and was a staff writer and editor on Architecture and Design for @home magazine for several years. He has guided tours of the Art and Architecture of Rockefeller Center and Radio City Music Hall, was an educator at the Cooper-Hewitt National Design Museum and the New York Transit Museum, and was one of a small team chosen to inaugurate the first seasons at One World Observatory as an expert on Arts and Culture. He is currently a resident expert on the Art, Architecture, and Acoustics at Lincoln Center and developing new content for Interboro Tours.

Along a stretch of midtown Manhattan streets less than a mile in length stand some of the most important buildings in the country. In this compact area, the world's most influential architects gave birth to American Modernism, built its undisputed triumphs, and sang its swan songs. If you and your group would be interested in hearing the fascinating story of the rise and fall of Modernism in New York on a walk through some of my personal favorite works of Architecture, you couldn't find a more fun, knowledgeable, or enthusiastic guide. Please contact me whenever you'd like, and I'll be happy to discuss details and tailor an experience to exactly suit your needs and interests.

The background image is an exquisite photograph of Gordon Bunshaft's Lever House (1952), by the talented photographer Niznoz. Much thanks to him for the use of it.